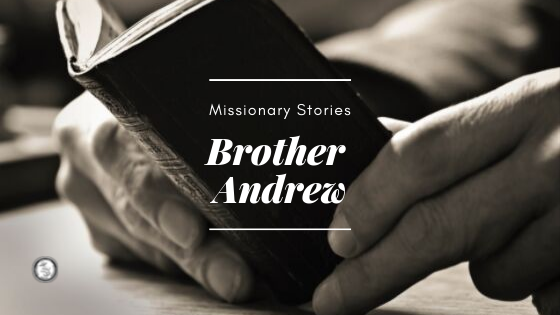 Brother Andrew, a missionary commonly referred to as God’s Smuggler, served our Lord by putting his life at risk to smuggle Bibles into forbidden territory during the Cold War. His mission often took him across enemy lines for the sole purpose of placing the gospel in the hands of those who needed it most. Many of his border crossings placed his life in dire peril, yet he continued on in service to His king, trusting the Lord would protect and enable him to continue in His service.

Over the years, Brother Andrew’s Bible delivery mission took him through many different locations throughout the world. He developed a prayer which became a staple of each endeavour he undertook which reads:

“Lord, in my luggage I have Scripture I want to take to your children. When you were on earth, You made blind eyes see. Now, I pray, make seeing eyes blind.  Do not let the guards see those things You do not want them to see.”

Due to the immense danger of Brother Andrew’s global Bible delivery mission, he earned himself the affectionate nickname of “God’s Smuggler,” a moniker which later became the title of a book detailing his life and ministry. A bestseller, this book sold over 10 million print copies and was later translated into a total of thirty-five languages.

Brother Andrew’s life affected other believers deeply through the powerful reality that he was an ordinary man used in an extraordinary way by a loving and holy God. This truth gives hope to all that God still works through the humblest of people to accomplish His greatest tasks.

In the words of Brother Andrew, “The Bible is full of ordinary people who went to impossible places and did wondrous things simply because they decided to follow Jesus.”

“The real calling,” he has said, “is not a certain place or career but to everyday obedience. And that call is extended to every Christian, not just a select few.”

Brother Andrew was not only a faithful servant in fulfilling His God-given calling but also in serving as a source of inspiration for other believers. His testimony and life’s work was an encouragement to many to seek their own ways to provide tangible help and support to Christians suffering persecution worldwide.

The ministry Brother Andrew started, Open Doors, now has operations all throughout the world which provide assistance to persecuted believers in more than 60 different countries.  These workers continue Brother Andrew’s mission, risking their own lives to bring Bibles into countries where the Word of God is strictly forbidden.

No comments yet.
Copyright ©2017 Anchor of Hope Ministry, All Rights Reserved.